On Presidents’ Day let’s take a look at First Ladies and their sense of style.  If anyone needs a personal brand and an individual style, it’s the First Lady.  Unfortunately, the commentary is often on what they are wearing instead of who they are or what cause they stand behind.  Most are very inspiring, intelligent women with a drive and ambition all their own which is reflected in the clothing they wear.

When I work with my clients, one of our first tasks is to nail five or fewer adjectives that describe who they are.  Now, I have never had the pleasure of working with a FLOTUS, but if I had, this is what I would say:

Her style says she is elegant, modern, confident, feminine and adventurous.

She wears beautiful, classic dresses, that were also sleek, modern and feminine.  Lots of fit and flare styles.  She changed her hairstyle, I want to guess, ten times during her eight year reign… AND she single-handedly changed the taboo about women of a certain age going sleeveless.  I love her and her style!

Jackie O and Michelle Obama have similar styles but Jackie set a timeless precedent.  She was classic, elegant, and refined.  Once a photographer for the Washington Times-Herald before marrying Congressman John F. Kennedy and an editor later in life, as a First Lady, she was known for her emphasis on arts and culture.  She was admired for elegance and became an icon; she was also generous and family oriented.  Do you relate to this style?

Wow, she was a beauty.  I used to only think of her as the older stately matriarch of a powerful political family.  But now, as I analyze her style, it was both feminine, romantic.  I understand her personality was strong, powerful, and at times, funny.  Although, in her older years, if I were her image consultant, I would have suggested some changes to her wardrobe (about making choices that did not age her so much!)

My take: warm, charming, approachable.  Known as a loyal wife and mother and an advocate for literacy and health.  Her style was classic and conservative.

She was a gymnast in her youth and clearly falls into the sporty, natural style classification.  She was outspoken, active, and an advocate for the women’s movement.  She was an independent thinker and fought for equal rights, abortion, gun control and drug legislation.  Her style garnered the respect she deserved.

Hilary has definitely undergone a style evolution: we grew up with her and saw her as elegant and strong… but sometimes a bit frumpy.  Her style has re-popularized the pant suit, and during her run for president, she mostly chose monochromatic pantsuits that elongated her figured and made her look polished instead of outdated.  Whether you love her or hate her she has been a woman with a brand and a force to be reckoned with most of her life.  I personally admire her strength and tenacity.

What about you?  If we could easily Google your name and see a catalog of images, what would they say about who you are as a person?  If you are interested in creating a personal style check out my free quiz on my homepage: https://www.cyndyporter.com/.  In fewer than 5 minutes you can get a sense of your style, and what avatar I associate with that style, and some ideas on how to dress to express who you are.  Have fun with it!  How you dress is your most powerful communication tool.  It is all about self expression and showing up with confidence.

Want to join the discussion?
Feel free to contribute!

This site uses Akismet to reduce spam. Learn how your comment data is processed. 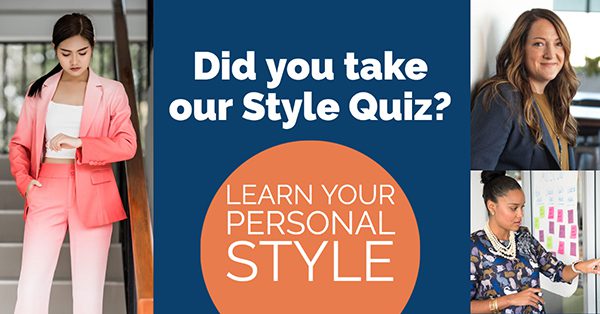 Under Where?! What to wear under your clothes.
Scroll to top